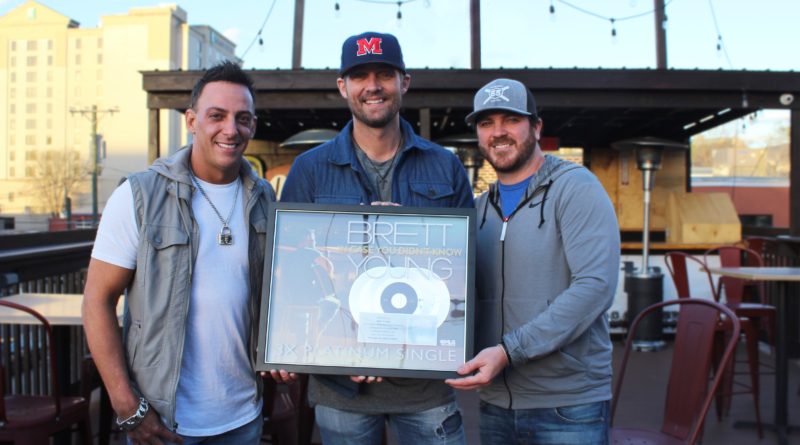 “Triple platinum. That’s not real,” Young joked. “I’m so thankful to my cowriters, fans and Country radio for making this song what it is!”

“In Case You Didn’t Know” is one of three back-to-back No. One hits from Young’s debut album, with his latest single “Mercy” rapidly climbing the charts. Amidst the momentum, Young has been nominated for an ACM Award for New Male Vocalist of the Year and is the only nominee in his category with a 3X Platinum song.

Brett Young’s “soothing, approachable” (New York Times) self-titled debut album (BMLG Records) became an instant success upon its 2017 release when it dominated the Top 20 on the Country Albums chart for 37 weeks. His lead single PLATINUM-certified “Sleep Without You” climbed to the top of the charts and was followed by his breakout smash “In Case You Didn’t Know.” The hit’s official music video surpassed 175 million views – more than any debut Country artist. Young’s third single, GOLD-certified “Like I Loved You” skyrocketed to No. 1 and stayed there for three weeks. His current single, “Mercy,” is currently being introduced to Country radio and is rapidly climbing up the charts.

Drawing in a devoted fan base with his unique voice, “a gentle and seductive combination of silk and gravel” (All Access), he “doesn’t sound like anyone else in Nashville” (Omaha World Herald). Named as the only Country act to Billboard’s Top 10 New Artists, fans have flocked to hear Young’s distinct sound live, selling out every single stop on his debut headlining CALIVILLE TOUR. This week, Young will head overseas for performances at the C2C Festival in London, Glasgow and Dublin as well as CMC Rocks Festival in Brisbane, Australia. Kicking off April 5, fans can catch him on Thomas Rhett’s LIFE CHANGES TOUR 2018 which runs throughout the fall. For additional information, visit brettyoungmusic.com.