This Friday, Sept. 11, Contemporary Christian duo for King & Country will give Iowans a heavenly dose of something they’ve been missing this summer due to the cancellation of the Iowa State Fair: live music.

The four-time Grammy award-winning Australian duo of brothers Luke and Joel Smallbone will be on hand for a drive-in performance in the North parking lot on the Iowa State Fairgrounds, the group’s third appearance at the fairgrounds since 2017. Gates will open at 6 p.m. and the concert will begin at 8 p.m. For tickets and more information, visit https://www.iowastatefair.org/participate/whats-new/.

ListenIowa caught up with Luke Smallbone recently to talk about the show, his family’s foray into farming, and another exciting announcement, that of a forthcoming Christmas album, which will be released on Oct. 30. The album, titled “A Drummer Boy Christmas,” will consist of 13 tracks and will include their now-iconic rendition of “Little Drummer Boy,” as well as several other Christmas standards and originals. (Editor’s note: This interview took place prior to the official album release announcement) 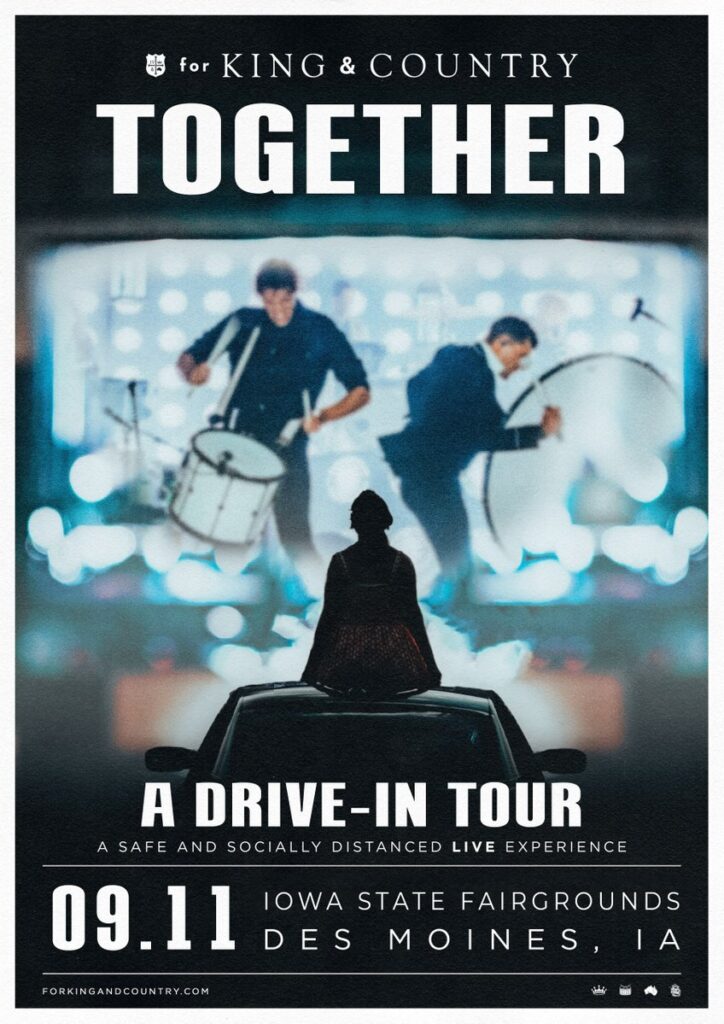 How has life been for you during this pandemic?
Everybody’s situation has been quite different. For me, it’s been a bit of a breath of fresh air. I’ve been married a little more than a decade now, and I’ve never been home this much, ever. To be home and kind of making these memories has been amazing. We live in the country, so we had this dream of having a little cattle farm, so we have eight cows now, on some land. Never in my wildest dreams did I think I would be a cattle farmer. (laughs) At the end of the day, no matter what happens in the world, I’ll have a little bit of beef. (laughs)

And this “farming foray” just came out of the blue?
We bought some land, about 30 acres, and we’re in the country, so it wasn’t like a fortune to buy. We had talked about making our property, not necessarily self-sustaining, because that’s too much of a statement, but I wondered what it would look like to work and use the land a little bit. We stumbled upon the idea of cows. So we started with five, and we now have a bull, and two of the cows have had calves.

How much did the pandemic alter the band’s touring plans this year?
We had about 120 shows booked for the year, and we’d done maybe 15 or 20 when all of it changed. We were in the middle of a tour when everything hit. We were up in Canada to do 12 shows, and got two shows in when they shut down the border. So we had to cancel the rest of that and go home. And really, for the first several weeks, we were just trying to figure out what to do, and what was going on. In the process, we’ve been making a Christmas album, and have done a lot of things virtually. We’ve been doing the drive-in shows, but for the rest of the year, just so everyone is safe, obviously, we won’t be doing any of the traditional type shows. We’ll see what next year looks like.

Any more details about the Christmas album?
We wanted to make a Christmas album, because Christmas this year is going to be particularly important. People want to celebrate, to have some hope, and to have some joy. We hope that making a Christmas album and doing some Christmas events will be a way of aiding the celebration. One of the songs we’ve become known by, ironically enough, is “Little Drummer Boy,” and we’ve got a remake of that. We’ve also done “Angels We Have Heard On High,” and eight to 10 others. There will be two originals, and eight kind of classic covers as well. We’re really thrilled about it.  It’s probably the most proud I’ve been about any piece of art we’ve created.

How did the drive-in performances come about?
Probably the safest thing we could do were these drive-in shows. At first we weren’t sure what the quality would be, what it would look it, what the experience would be. But what’s cool is that people still want to do things. People still want to go out as families and do something — probably more than ever, actually. One of the first ones we did was on July 4 when we did back-to-back days of drive-ins. What was amazing was that people were showing up four hours early. They wanted to get their spot, kind of like a college football game day. We realized there was something to this, and we decided to take it around to as many places as we can and where it makes sense.

How will the show work?
We’re right there, doing actual shows at drive-in. We set up a little stage below the screen and perform. Most of the people in the cars can see us, kind of like you would at a normal show. And for the ones who can’t see as well, we’ll be right there on the big screen. We did a show at Fort Collins, Colorado, where there were multiple screens. You had cars facing in multiple directions. Surprisingly, it’s a really special time. You’re looking for that unique memory. Well, this is it. This is something that’s basically never taken place before. We are innately social critters, and we all want to celebrate something. People kind of follow the leader, and you don’t want to be left out of things. You want to be able to say you were there. In 2021, I think there will be move avenues for people to consume live entertainment, but I still think, at the end of the day, one of the most unique experiences is a live experience. It’s always unique and it’s truly only what takes place right there in that moment. If you stream it, you record it, doctor it up a little bit, everybody knows it will be the same every time you watch it. This won’t be that.

Have you worked up anything song-wise specifically for these drive-in performances?
Put it this way, the format we’ve stumbled upon for these drive-in shows, we don’t do for any other event. It’s curated and designed specifically for drive-ins. It’s not just us packing up and going there to play. We spent a lot of time into the design of the show and to hopefully make it the best experience that you can have. 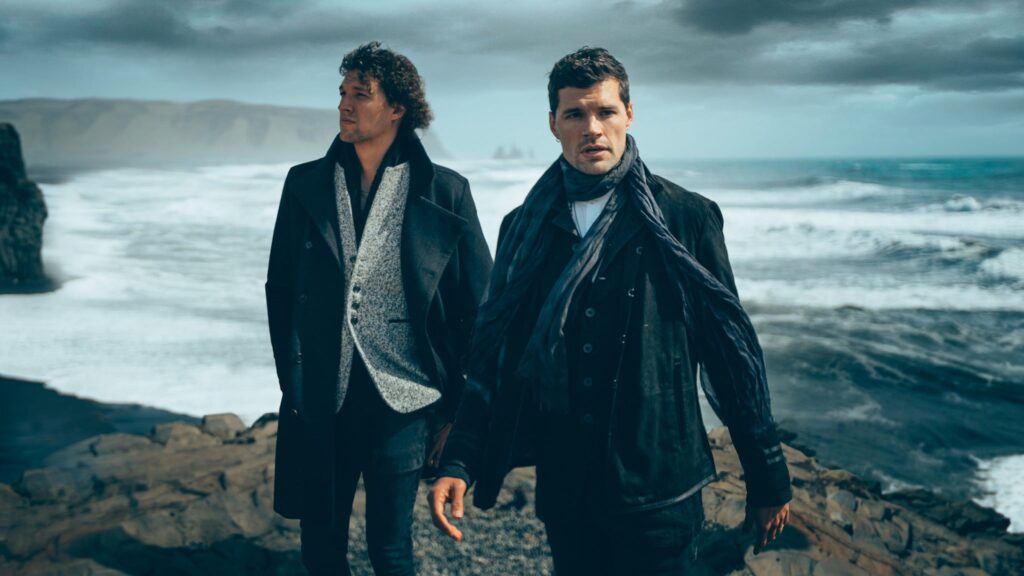 Talk about your last album, “Burn The Ships,” which really took off, sent you guys on a big world tour, and solidified your place on the music map.
That album is a very personal album for Joel and I. Before we went into the studio, we asked ourselves what songs on previous albums were the ones that people connected with. We realized that the songs they connected with the most were the ones that were very real. It wasn’t, “Oh, I’ve got this catchy phrase that I’m going to write a song about.” The basis was actually the purpose and the story first, and then came the song, versus the other way around. With “Burn The Ships,” we’re telling personal stories and showing parts of our heart. Some people say they don’t like that type of art, that type of honesty. That’s what you’re up against. But the inverse happened. People said, “I feel your story, your voice and the hope in it.” At the end of the day, it was one of the most satisfying things that we’ve been a part of, because we’re not dealing with just cookie-cutter issues there. We’re dealing with mental health, addiction, loneliness, things that people are actually going through. At the end of the day, what makes successful art is a larger group of people saying they like that particular art; it doesn’t necessarily mean the other art that isn’t as successful isn’t as important, though. It’s very subjective and in the eye of the beholder.

What can we expect at the Des Moines show?
Well, I know there are some people out there that think that because it’s in a drive-in that it’s not going to be for King & Country’s usual energy, or it’s going to be scaled back. No, it will be us, but just at a drive-in. If we’re going to do a show, we want it to be all out, guns blazing and something special.