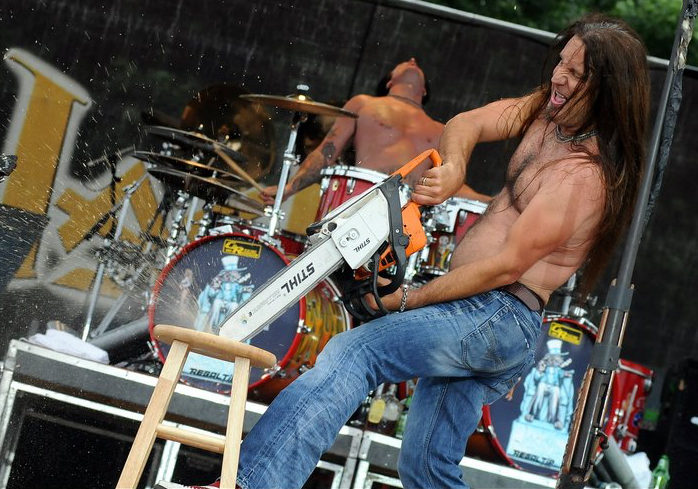 He’s brash. He’s quick to the trigger. He’s unafraid of speaking his mind.

The good-ol’ boy, straight-shootin’, southern drawl of the Jackyl front man is as familiar to hard rock fans as the lengthy straight mane he’s sported for decades. What you’ve seen on TV — whether it be through the band’s videos, Dupree’s reality TV show or otherwise — is indeed what you get. Catch him on a good day, and he’s a quote-a-minute machine and a journalist’s dream. Catch him on a wrong day and you’re as useful to him as a one-legged man in an ass-kicking contest. Either way, you know where you stand.

Dupree began his tango with fame in 1992 when the Atlanta-based quartet struck a nerve with hard rock fans longing for some straight ahead rock ‘n roll. The band’s self-titled debut album on Geffen Records went platinum, thanks in part to the single, “The Lumberjack” in which Dupree went full throttle with a chainsaw in place of a guitar solo. The 54-year-old brought his “instrument” to the stage with him as well, much to the delight of rabid Jackyl fanatics worldwide who basked in watching their man cut up a barstool each night with precision and skill. Or Stihl (you’re welcome for the plug, there, chainsaw maker). Other album tracks such as “Down On Me,” “When Will It Rain,” and “I Stand Alone” solidified the album as a straight forward keeper that is still played on rock radio to this day.

When hard rock was sent back to the underground in the mid-90s thanks to the grunge movement, Dupree stuck with his Jackyl brand and released four more albums from 1994-2002 before taking an eight-year hiatus from releasing new material. Not one to sit still, however, Dupree saw opportunity and branched out and into the business world, starting his own record label and artist management company (Mighty Loud Entertainment) and entering into a partnership with Full Throttle Saloon owner Michael Ballard in Sturgis, South Dakota, to produce a reality TV show. In 2010, Dupree launched the “Jesse James Spirits” line of alcoholic beverage products, whose brands include the “Jesse James America’s Outlaw” brands of beer and straight bourbon whiskey. 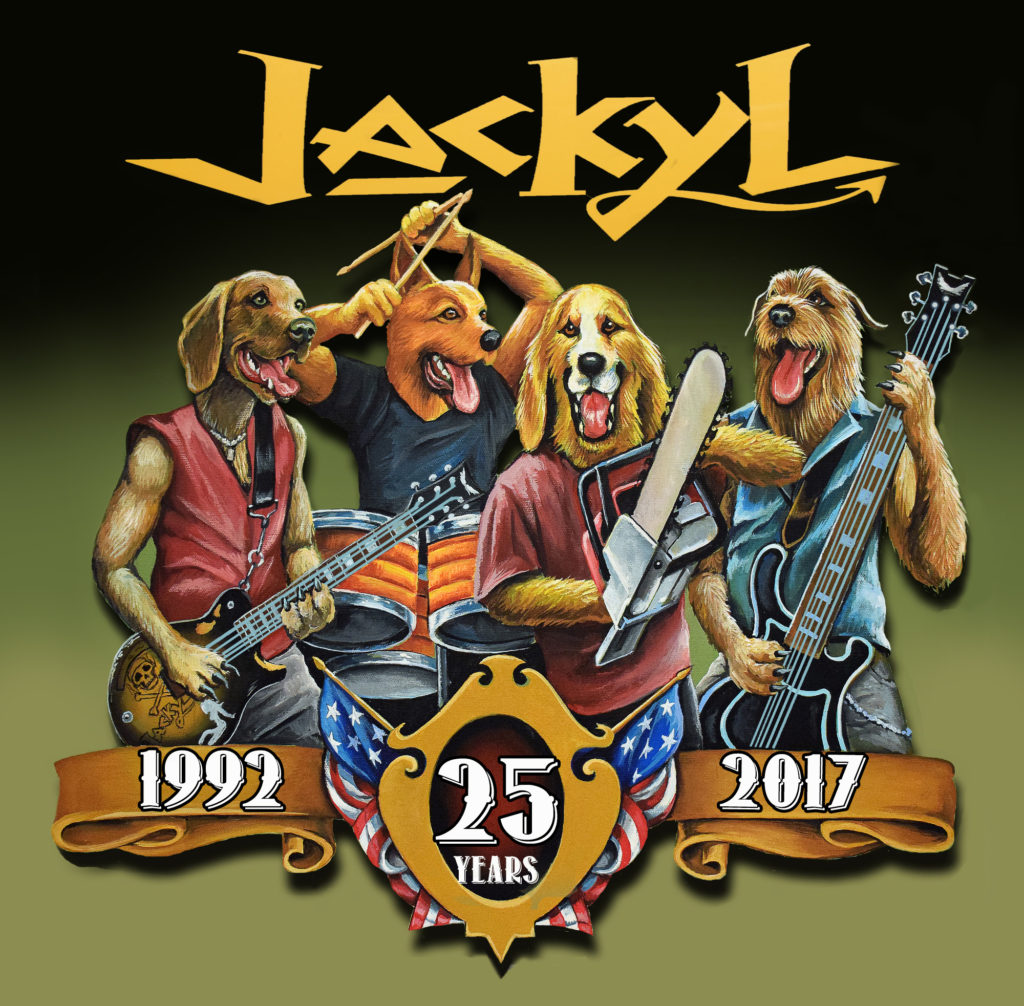 Is Dupree the true hardest working man in show business? Possibly. Yes, he wants you to drink his liquor, buy his records and spend money at his saloon, but most importantly, whatever you do, he wants you to remember one thing:

He’s Jesse James Dupree, and his band is Jackyl. Period.

The foursome hit the road in support of the recently-released 25th anniversary CD, and ListenIowa caught up with Dupree for a quick conversation prior to he and Jackyl band mates Jeff Worley (guitar), Roman Glick (bass) and Chris Worley (drums) unleashing their whiskey-soaked brand of music to the masses.

How are things in the world of Jackyl these days?
If it got any better, you’d just have to shoot me. Everything’s doing great, man. The band’s doing 100-plus show per year, and they’re more lethal than ever. The guys are playing their asses off, and we’re having more fun than the law should allow. I’ve got the Jesse James Bourbon, which is doing incredible. We’re heading toward 150,000 cases sold, which is amazing for a young baby brand in the liquor business. We’ve got a brand new single barrel Tennessee whiskey that’s out in select states.

That enough to keep a guy busy.
Yeah, and I’m working with Harley Davidson now, too, consulting for them, and that’s been an absolute blast. The new models are amazing.

Where do things stand with Jackyl in the grand scheme of things now, especially since you have all of these other ventures going on?
I’m not holding back on anything with Jackyl. It’s all synergetic. I’ve got a Harley Davidson between my legs, a bourbon signing, and a rock n roll show right after that. It’s all just the perfect storm. It all works together. Jeff just go through co-writing his second book, a cookbook; Roman has a jewelry company. We lift each other up. It’s always been a real harmonious thing between all of us.

So when some artists talk about the “grind” of the road, it sounds like, in your mind, that’s just part of the big picture.
Yeah, man, this is just what we do.

You guys have the world record for performing 21 shows in 24 hours. How is that even possible?
The band set up in a radio station in Texas and the Guinness Book people said that each show had to be a minimum of 30 minutes. So we made sure that happened. We had a 15-minute meet and greet and another 15 minutes to change the audience out. I sang my ass off for about the first 17 of them. 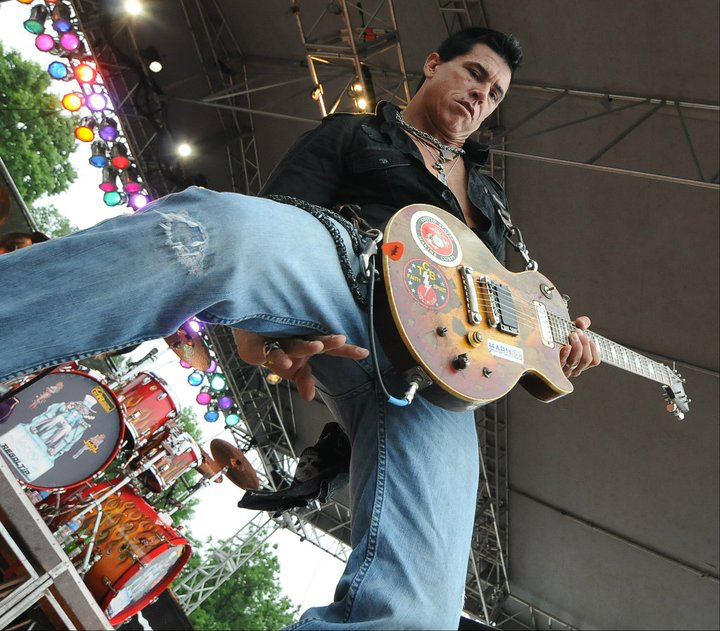 Your last album, “ROWYCO,” in 2016, got some good reviews as a solid Jackyl album, but it’s much harder to get to the masses these days without MTV or radio support for new music. What’s your approach to putting out new music to the market these days?
I don’t overanalyze it. “When Moonshine and Dynamite Collide” came out, then “ROWYCO,” those albums have proven to be as solid as the first album. People have gravitated to those songs, and there are seriously staples in our show now. I can’t imagine us not playing those songs. I can’t imagine a show without “Screwdriver” (from 2012’s “Best In Show”) in it, or without “My Moonshine Kicks Your Cocaine’s Ass.” (from 2010’s “When Moonshine and Dynamite Collide) Those songs will always be in the Jackyl show.

That’s a good thing, then. For lot of artists that came from the 80s or early 90s, the fans don’t want to hear the new stuff. They just want to hear the “hits.”
I’ll tell you right now, when I start “Just Because I’m Drunk” (from 2016’s “ROWYCO”) and sing the first line, everybody knows it and starts singing it. Don’t ask me how, but it blows my mind every night. It’s become a damn hit on its own. I think it’s just because it’s an honest song. It’s like Willie Nelson said, “Three chords and the truth.”

How does it feel to be playing “Lumberjack” 25 years later, then? Does it ever get tiring, or do you still just enjoy everything about it?
Well, that’s like me asking you, “Do you ever think about having your penis removed?” (laughs) You know, you just go, “I’ve had enough of this. I’m just going to have this damn thing cut off. (laughs) When was the last time you thought that?

I think I would take a pass on that thought, thanks. (laughs)
No, seriously. Do you ever think, “I’ve used this thing enough, and I’m just going to have it removed.” (laughs)

The barstools that you cut up every night on stage. Where do they come from? You’re a businessman. You have a sponsorship for those, too? (laughs)
Man, I should have taken stock in that company. (laughs)

Ever had any close calls with the chainsaw? That thing isn’t a prop. You really go at it.
I’ve had 22 stitches from that thing. If you average it out, that’s less than three-quarters of a stitch per year, so I’m dong pretty good.

You became a partner in the Full Throttle Saloon in Sturgis a few years ago. How has that been going for you?
It’s going incredible. You know, unfortunately the bar burned down a year ago September. We cried about it for a minute, then we reminded ourselves that nobody got hurt or killed, and we picked ourselves up and went down the road, bought 600 acres, and we now have the Full Throttle Saloon sitting on a campground. We got the Pappy Hoel Campground, and it’s just an amazing property. We’ve got a dirt track where we’re racing pre-1920 Harley Davidsons, a restaurant on the property, an Olympic-sized swimming pool, and just some really cool stuff. The new Full Throttle blows everybody away. Michael didn’t build the same bar. He’s got a great mind for that stuff, and I think everybody that walks in there is just like, “holy shit!” They’re blown away.

And how about Mighty Loud Entertainment, your record label and artist management company. How is that going and who is on your roster these days?
I’ve got a band called Wayland that I’m working with. My son is actually in the band. Their first album drops this month. I had Powerman 5000 on my label for a bit, and I did a Tanya Tucker release, too.

The liquor side of your business portfolio has turned into something pretty profitable for you, too. Did you see how successful someone like Sammy Hagar is with his liquor venture and follow that template, or was this just something that evolved naturally?
It kind of evolved because I was consulting with Sydney Frank for his Crunk Energy Drinks. Sydney brought Greygoose to America, and he brought Jagermeister to America, and I just kind of realized that I understood the distribution model for that stuff, and one thing kind of led to another.

What’s in store for fans this time out as you prepare to hit the road yet again?
It’s not about coming to see the show, it’s about coming to be a part of it, as always. We’re excited about being back on the road, and back on the bus. We’re going to make this weekend stink, so you all get on out, spread the word, bring your friends be ready to throw down, Jackyl-style. 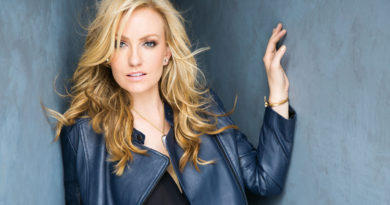 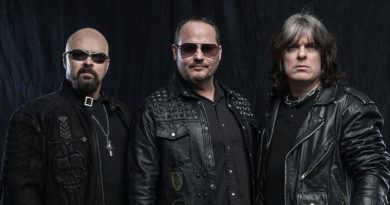 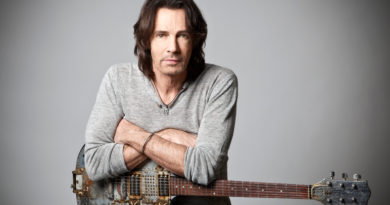