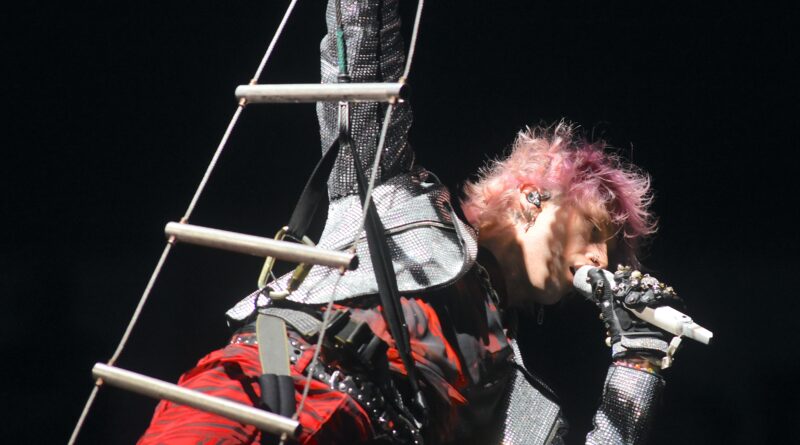 As it turns out, rock might not be dead after all.

It didn’t take long to figure out what Machine Gun Kelly, the rap/rock/musician/actor/sometimes-controversial-and-pink-loving persona was out to do Tuesday night during his “Mainstream Sellout” tour stop at Wells Fargo Arena in Des Moines: be a rock star.

When a pink miniature helicopter opened the show by “flying” down from the rafters on one end of the arena to pick up a hidden Kelly on the other, it was game on. The rapper-turned-rocker emerged from the floor area dangling on a rope ladder attached to the helicopter, which brought him back to the main stage, much to the delight of the nearly 8,000 in attendance. For the 50+ crowd, it was a bit of deja-vu all over again. Some of this was straight out of the late 1980s/early 1990s hard rock playbook. Wow ’em early. But Kelly isn’t here for them, really. He’s here for the hearts and minds of the Gen Z’ers, many of whom think canned background vocals and sometimes even lead vocal enhancements are as much a part of a show as the people onstage playing actual instruments. To each his or her own. But for Kelly, it’s about the show, particulars be damned.

To his credit, Kelly checked off all the rock star boxes: tattoos; mult-colored spiked hair; a stage show that featured fire, flying objects, giant inflatables and smoke; an occasional cigarette and/or joint; and a confident persona to boot. But putting on an appealing visual is only half the battle. In order to climb the rock ladder, a more important ingredient has to be in the mix, too: music. Surprisingly, for an artist who began his career on an entirely different side of the music spectrum (rap), Kelly had that pretty much covered as well.

If you wanted his former rap-centric self, it was there in the form of “Ay!”, the thumping rhymes of “El Diablo,” or the amped-up “Floor Shot,” which saw Kelly rise above the crowd from a platform at the front of the slanted, checkerboard stage while the band carried on as pyrotechnics shot off around them.

But it was Kelly’s pop-punk side that proved most effective. “Emo Girl,” “Ticket To My Downfall,” and the rocking “Maybe” made the show worth it’s price of admission, the latter showcasing his excellent backing band of guitarists Justin Lyons and Sophie Lloyd, drummer JP “Rook” Cappelletty, keyboardist Brandon Allen and bassist Steve “Baze” Basil.

Kelly even brought out the big guns in the form of a giant, 30-foot inflatable “monster” named “Internet” during new track “Paper Cuts.” “Internet” emerged at the back of the stage to hurl insults at Kelly, who bemoaned the often dark recesses of the Internet, its inhabitants and him having to overcome the negative effects it has had on him both professionally and personally. But don’t feel too badly for the 32-year-old Houston, Texas native. You don’t get to marry Megan Fox or play the part of drummer Tommy Lee in a Motley Crue movie by letting the Google box drag you down.

Frequent as they were, the rants were short, though, and often gave way to lighthearted moments such as Kelly calling out a stunned concert-goer from the stage between songs as she left her seat to get a drink. During “Bloody Valentine,” Kelly brought a pink pants- and shirt -wearing audience member onstage —  only to ignore him for virtually the entire song, a laughably uncomfortable moment in itself as the man walked/danced around looking at Kelly as though he was waiting for his cue to do something — anything.

Kelly ended the more than 2-hour set with “Make Up Sex,” “My Ex’s Best Friend,” and “Twin Flame” to close out his first arena headlining show in Des Moines.

It’s a significant jump to Wells Fargo Arena from his former Des Moines haunts such as the Val Air Ballroom and the former 7 Flags Events Center during the past 10 years. But if rock music is indeed dead, as Gene Simmons of KISS has claimed on multiple occasions, like it or not — and like Kelly or not — it’s going to have to be up to people like him to play a part in resuscitating it. Tuesday night was a good starting place at least. Despite all the pink. 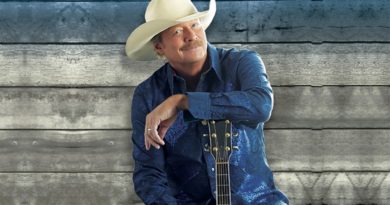 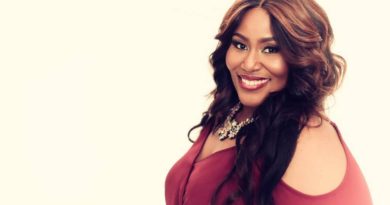 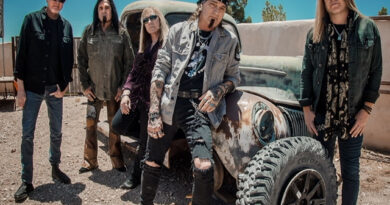