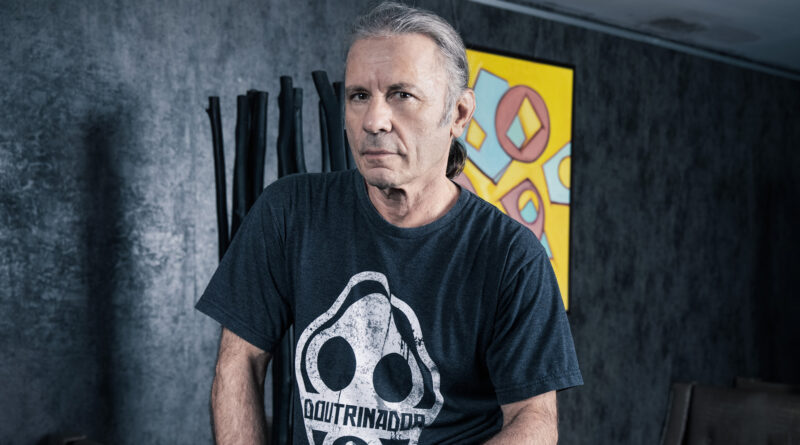 After listening to Iron Maiden frontman Bruce Dickinson for nearly three hours at the historic Hoyt Sherman Place during a stop on his “An Evening With” tour Feb. 16, one is left with a singular question: Is there anything this man cannot do?

Obviously, he’s an entertainer first and foremost, having manned the Maiden helm since 1982. You can’t be average and front one of the greatest heavy metal bands in the world. Plain vanilla Dickinson is not. Never has been. He’s a commercial pilot. He’s a businessman. He’s an Olympic-level fencer. He’s a writer. He’s a brewer of ales. He’s the carrier of a certain “presence” and onstage communicative ability that makes most motivational speakers seem dull and trite.

So when Dickinson took the stage with just a bottle of water, a stool to hold it up, and a video screen behind him to give his stories a visual element, the smallish, but receptive crowd knew they were in for something special. This was Bruce Dickinson after all. The Doer of Most Everything. And Dickinson didn’t disappoint. His expert story-telling ability in the context of Iron Maiden songs was already legendary amongst fans. “The Rime of The Ancient Mariner,” “Seventh Son Of A Seventh Son,” and “Alexander The Great,” to name just a few of the dozens with which Dickinson has injected his unique lyrical flair. But alone onstage with no backing band had the potential to be awkward. Connecting with 50,000 screaming fans singing “Flash of The Blade” (see Bruce, we caught that reference) is one thing, but alone onstage is quite another. Fortunately for Dickinson, it doesn’t matter if there are tens of thousands of ears and eyes gazed upon him, or just a scant few; he’s there to entertain and take you to places you’ve never been, particularly, his life.

Early in the show he explained how his parents sent him to an English public school, which doesn’t translate the same here in America, where it’s the standard. In England, Dickinson said, public school is where the elite, the politicians and the judges go.

“And they all recognize each other,” he exclaimed to a round of laughter. “They’re all like Mr. And Mrs. Potato Head. I don’t know if it’s the inbreeding or what, but they have no chins!”

Those moments of hilarity mixed with personal goings-on from his life were many during the evening. He showed the actual letter on-screen that was sent to his parents after his expulsion for pissing in the headmaster’s dinner and his propensity to run his mouth (“His tongue has always been his undoing,” it read). It was there, too, that Dickinson got his very first introduction to heavy metal after hearing a few strains of a Deep Purple song inside a dorm room that he was walking by.

“I heard it and just HAD to know what it was, so I knocked on the door, and this big senior boy answers and says, ‘Yeah, whatchou want?’ Dickinson said in a deep voice. “And I asked what he was playing. He goes, ‘It’s Deep Purple. Now fuck off!’ Then slammed the door.”

Thank the Lord for asshole seniors with loud music.

His tales of journeys in and out of various pre-Maiden bands (all, ironically, which started with the letter “S”) were equally as entertaining, particularly a band called “Shots.”

“We were playing in a pub south of London and there was no stage, just flat,” Dickinson said. “It was quite cramped, but the worst thing was that the only door to the restroom was immediately behind our drum kit. The first guy was drunk, knocked over half the kit on his way there, stayed far too long, and by the time he was done, we had the drum kit put together again.”

On the drunkard’s way out, he promptly knocked the kit over. Again. Dickinson would have none of it. When a second person began making his way to the “can,” the vocalist stopped mid-song, asked the person’s name, and said he could proceed on one condition: he take out his “member” and show it to the audience. That didn’t happen.

“Nobody went for a piss for the next 45 minutes,” Dickinson said proudly to a roar of laughs.

The problem with storytellers is that, well, they’re storytellers. The tales, which start out believable, can go stale if they’re not careful. It’s simply a factor of sincerity. Audiences will sniff out fake stories and grow bored quickly. And that’s exactly why Dickinson’s evening works. Every second of it comes from first-hand, real-life experiences. After an hour and 40 minutes of detailing his life, you aren’t gorged and just want it to stop. You want more.

The evening closed with a 25-minute question and answer session in which Dickinson read audience members’ queries from note cards. The questions ranged anywhere wanting to know what his favorite planes to fly are, to one fan, who claimed to have seen Maiden perform in Des Moines at the Iowa Jam back in 1982 on the “Number of the Beast” tour, wanting to know what Dickinson’s secret to vocal longevity has been. An impromptu few bars from the chorus of “Stranger In A Strange Land,” from the 1986 album, “Somewhere In Time,” was part of the answer. Sometimes people just “have it.” Dickinson is one.

And legions of his, and Iron Maiden’s, fans are thankful for it. From here to eternity.