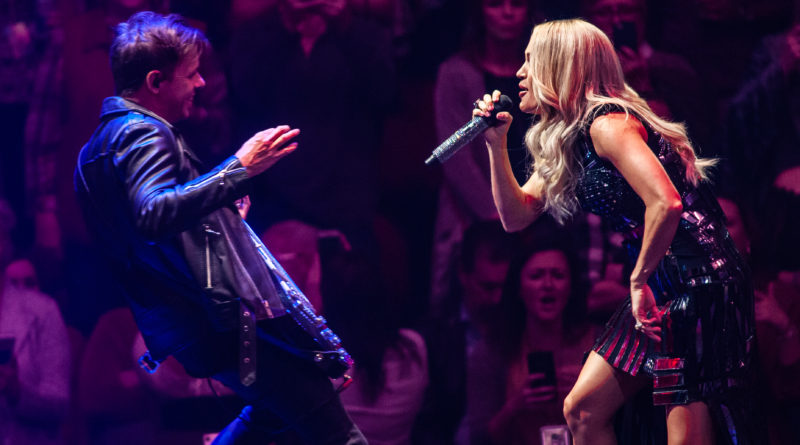 After a stunning two hours in front of a capacity crowd at Wells Fargo Arena in Des Moines Saturday night, it can be said with 100 percent certainty that Carrie Underwood is the best live female performer out there today. Your eyes are not failing you. You read that correctly. The Best. Country or otherwise.

The 36-year-old artist has been wowing fans with her powerhouse vocal chops since packing her bags as a small-town Oklahoman to compete in, and win,  “American Idol” 15 years ago. Some people have been late the party (this writer included) in recognizing just how far ahead of the pack she is. After all, how much credibility can a reality show artist have? “Idol” is more of a production than a conduit for long-success for the winners. Just ask Lee DeWyze, Candice Glover, David Cook or Kris Allen (best known as the guy who beat eventual Queen vocalist Adam Lambert in Season 8). Remember them? That said, a scant few have managed to remain relevant, including Underwood, who has parlayed her win on the show to the greatest heights of them all with six consecutive No. 1 albums on the Billboard’s Top Country Albums chart, seven Grammys and 14 Academy of Country Music (ACM) awards. But being at the head of the class doesn’t necessarily mean you’re the best. Sometimes it boils down to who has the best supporting marketing machine, or who has the best manager who can cut the best deals.

Yes, Underwood may be the beneficiary of those as well, but she’s different in that, once viewed in the arena of a live performance, her talent is impossible to ignore; it’s that good.

When Underwood’s “Cry Pretty Tour 360” with openers Maddie & Tae and Runaway June, rolled into Wells Fargo Arena Saturday night with its in-the-round, mammoth-sized stage setup that spans the length of a basketball court and then some, it was time to show just how much. And damn, did she deliver.

As the last strains of Guns ‘N Roses’ “Paradise City”  faded out of the PA, the house lights went down and soon gave way to a sparkly Underwood rising from the center of the stage to deliver the 1-2-3 punch of  to “Southbound,” “Cowboy Cassanova” and “Good Girl,” with enough lasers, lights smoke and risers to make KISS blush. It was as much a country show as a basketball is a pumpkin. This wasn’t country. This was rock. Songs such as “Backsliding” and “Two Black Cadillacs” kept pace, and it wasn’t until midway through the show that Underwood showed her country leanings with the crossover hit “Jesus Take The Wheel” from her multi-platinum 2005 debut album album, “Some Hearts.” Speaking of country, Underwood took time during the show to give a nod to the artists who came before her in the genre with a medley that included Tammy Wynette’s “Stand by Your Man,” Patsy Cline’s “Walking After Midnight,” Loretta Lynn’s “Coal Miner’s Daughter,” and Dolly Parton’s “9 to 5.” The crowd reaction grew louder with each progressing song, including “Rockin’ with the Rhythm of the Rain” (The Judds), ” She’s in Love With the Boy” (Trisha Yearwood),  “Independence Day” (Martina McBride), “Wild One” (Faith Hill), “Why Haven’t I Heard From You” (Reba McEntire) and “Man! I Feel Like a Woman!” by Shania Twain.

The only misstep (if you can even call it that) came earlier in the show when Underwood tapped into another medley that included “Temporary Home,” “See You Again,” “I Know You Won’t,” and “Just a Dream/Dream On.” With a large catalog of music to pick from and a finite amount of time in which to play them, Underwood instead chose to give the audience one bite of each.  While the intent was good, imagine ordering your five favorite dishes at a restaurant and getting one bite of each before a waiter took the plate from you. You’re glad you got the bite, but now that your tastebuds have been teased, you’re frustrated, too. Pick your best 25, Carrie, and roll the dice while remembering that old saying about not being able to please everyone.

Underwood’s few vocal imperfections were, well, perfect. In this day and age of auto-tune and backup tapes, seeing a singer put it all out on the line for two hours was refreshing, especially considering that the majority of her songs are sung in a scarily high register. Was she flat or sharp on a few occasions? Yes. But that’s the beauty of live music, too.

A feel-good moment came when Underwood told the story of “The Champion,” her famous duet with rapper Ludacris in which she  rought up an audience member from Kansas City to take his parts.

Underwood closed out the show with encores “Cry Pretty” and “Love Wins,” complete with her fourth wardrobe change of the night.

The only thing Underwood forgot to do was to raise her index finger toward the ceiling to signal her position amongst all other vocalists.

Call her humble, but just don’t call her anything except what she is — the best.