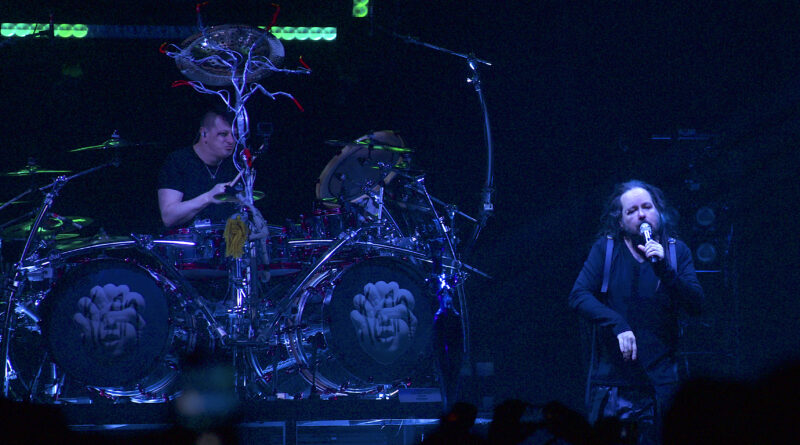 Fun fact: Corn, because of its unique cellulose covering, is indigestible. Keep that in your back pocket until later.

Nu metal purveyors and kings of the backward “K” hybrid of corn  — aka, Korn — strode into to Wells Fargo Arena in Des Moines Monday night, March 28, along with openers Code Orange and Chevelle to give concert goers a history lesson in the musical vacuum that was the 1990s. A decade that produced grunge, industrial, ska punk, a few dozen sub-genres, and yes, Nu metal. Those who flew the flag stood for minimalism, floor watching and everything in opposition to the extreme excess in the industry in the 1980s. Flash has no pan here. Even Wikipedia had it right for once, defining Nu metal as “a lack of guitar solos or display of technical proficiency.”

Code Orange and special guest Chevelle got the ball rolling, each in a different direction. Code took the harder approach, Chevelle the more melodic. Chevelle won by a mile, and may have even stolen the night. Heresy, we know.

Then it was Korn’s turn. Aside from drummer Ray Luzier, who is every part the secret sauce of Korn that Chad Smith is to the Hot Chili Peppers, nothing about Korn is impressive musically. But you have to hand it to the California-based quintet of Luzier, vocalist Jonathan Davis, guitarists James “Munkey” Schaffer and Brian “Head” Welch, and bassist Ra Diaz. Somehow they managed to convince an entire generation of music fans that less is indeed more, and that playing every song in the same key is the sign of consistency and gumption, not a lack of creativity.

Show openers “Forgotten” and “Got The Life” were solid. No arguments here, or amongst the 5,000 fans in attendance. Luzier’s precison, double-time high-hat groove on the latter was exceptional. But just when things are shifting into high gear, Korn got stuck. “Here To Stay” and “Start The Healing” were reminders that the group isn’t here to impress you with their musicality. They exist to bludgeon your senses. Period.

The band’s light show was solid, the stage was clean and roomy, and Davis’ trademark microphone stand was right there front and center, as always. Davis’ voice was strong, no easy feat coming off a two-year, covid-induced layoff.

This year is the 20th anniversary of the group’s landmark album, “Untouchables,” and the band reached far into the well to play deep cut “No One’s There,” which was met with some blank stares from a half empty floor. In reality, the song was a welcome change of pace and gave Davis a chance to prove that, yes, he can sing when he wants to. And play the bagpipes, which he nicely did as an intro to “Shoots and Ladders,” which included a portion of the double-bass section of Metallica’s “One.”

“Y’all Want A Single” gave way to the eerie chime-like guitar into of “Falling Away From Me,” which got the biggest reaction of the night, as did follow-up, “Freak On A Leash.”

Oddly enough, the highlight of the evening came during the five-song encore when Luzier was given time to display his drumming prowess with a short solo atop his chrome silver kit. In the encore, nonetheless. That’s ballsy. Cannons sent streamers into the audience during set closer “Blind,” and just like that, the meal was over. Bada-bing, bada bang. Cigarette, please.

So was it good? Put it this way: A kernel of corn, although indigestible, is good for you. It has some redeeming qualities. There’s healthy starch in kernels. And fiber.

Likewise, Korn is hard to digest but can be good for you as well, especially if you like things low and dark. Other redeeming qualities include:

Korn Setlist, Wells Fargo Arena, 3.28.22
Forgotten
Got the Life
Here to Stay
Start the Healing
No One’s There
Shoots and Ladders
Lost in the Grandeur
Y’All Want a Single
Falling Away From Me
Worst Is on Its Way
Coming Undone
Freak on a Leash