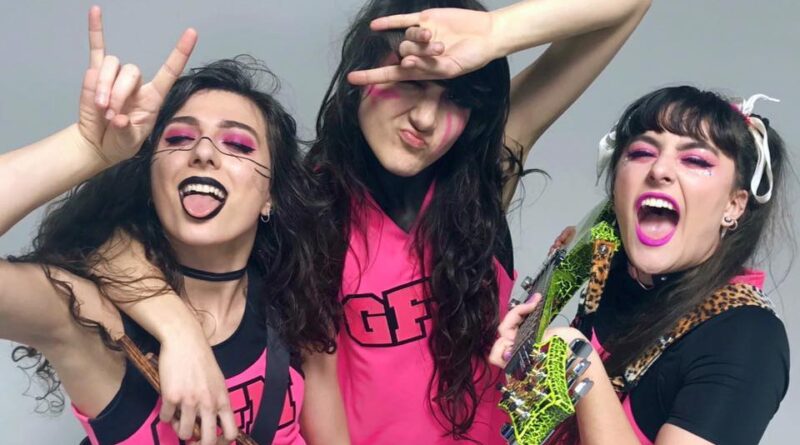 It’s difficult, if not impossible, to genre peg teenage rock band Gold Frankincense & Myrrh. Just when you think they’re one thing, they’ll shift gears and morph into another. And that’s OK, because GFM is not your average teenage girl band. They’re sisters. And believers to boot, both in the Lord and themselves. This is where they want to be. Doing what the need to do. Rocking hard while spreading the Word via their own genre of music they created: beauty core.

The Jacksonville, Florida trio of Maggie (bass/voals), CJ (guitar/vocals) and Lulu (drums/vocals) began their musical journey in 2016 with the release of “Identity Crisis,”  which was followed by a ton of touring in 2017 and 2018. In 2019, the band released their EP “Oh, The Horror!” Things were on the move. So much so that eventually professional wrestler-turned-rocker Chris Jericho took notice last spring and handpicked GFM to accompany his band Fozzy on the well-received “Save The World Tour” of 2022 that continued into early September.

Maggie took some time from the band’s busy touring schedule to talk to ListenIowa about what it’s like to work with sisters, when they realized playing music was their calling, and FaceTiming with strangers’ grandmothers. ListenIowa: Give me some history on the name of the band.
Maggie: We started GFM when we were really little. It stands for Gold Frankincense & Myrrh, which were the three gifts given to Jesus at His birth. Our mom actually came up with the name because she said we were three gifts given to her.  It’s a way for us to correlate our band to our Christian faith.

LI: Operating in a band is tough enough, but as sisters that takes it to another level. What are the pluses and minuses of working with siblings?
Maggie: Honestly, we’re not sure how people work in a band when they aren’t siblings. There’s that comfort level that is just automatically there because we are sisters, so we don’t have to worry about where people are going to sleep or sit in the van, ya know? Because we are sisters, there are definitely times where we argue because we’re very stubborn and want our own way but being in the band has taught us how to communicate and problem solve through the disagreements.

LI: How are disagreements handled, then?
Maggie: Communication is key. We give each other space to cool off and then come back together to solve the issue as a team.

LI: The number of all-female bands in the industry is very limited. Talk about why you think that is, and any challenges you have had to overcome along the way?
Maggie: The rock/metal scene has always been sort of a boy’s club, and I think that has made it difficult for female artists to flourish. Thankfully, the scene has grown immensely, and we’re seeing more female artists and bands gaining traction, including ourselves. I think more people are becoming comfortable with having guys and girls on stage as equals instead of as gimmicks, and I think that’s helping to pave the way.

LI: When did each of you begin playing an instrument, and did you grow up in a musical family?
Maggie: Well, we’re all sisters, so yes, we were a musical family; however, our parents were not musically inclined haha. They were actually the ones who pushed us to take music lessons when we were 5, and they encouraged us to start the band.

LI: Talk about the very earliest stages of the band. What were some of your first gigs, and at what point did you know this is what you wanted to do for a living?
Maggie: We got a lot of our first shows off of Craigslist actually, which opted for some interesting shows to say the least haha. We realized this band thing was for us when we were invited to play with a band called Omnipresent just outside of Atlanta. We were on spring break, so that was the only reason we could travel so far for a show. It was definitely a small show, but on the drive home, we told our parents that we wanted to play music for the rest of our lives. They were confused because we were 7, 10, and 11 at the time, but we all knew it then and there.

LI: Has anything changed musically since you first began playing together? Stylistically or otherwise?
Maggie: Oh, for sure. We wear cheerleading uniforms now, and our music has gotten both heavier and poppier if that even makes sense. We make the stage fun and chaotic, and we’re able to draw the audience into that madness. When we first started, we didn’t know what to do with a stage haha.

LI: Behind the scenes: Talk about who has helped — and continues — to help you go after this goal of playing music for a living?
Maggie: Our parents are a huge blessing. They help us on the road, our mom is our driver and manager, and our dad helps with the special effects and logistics behind running a band.  They’ve trained us to embrace the creative process of being in a band while also running it as a business. We also have people like radio promoters, label distribution, producers, co-writers, marketing teams, PR teams. There are so many people now, and the list keeps growing, but it’s definitely a necessity in order to have a successful band. We couldn’t do it without them.

LI: What’s the craziest thing you’ve seen from the stage so far?
Maggie: People have broken body parts in mosh pits at shows which is always scary. We try to make sure nobody is getting hurt, but sometimes accidents happen. If that’s the case, we try to find whoever got hurt and make sure they’re getting the help they need after the show is over.

LI: And the strangest request you’ve had?
Maggie: We’ve Facetimed a lot of people’s grandmas (laughs)

LI: Best moment in a live setting, and why was it so?
Maggie: I think the best moments are when you play shows, and you know the people in the audience. They’re singing along to all the songs, and they’re moving in the crowd, but the best part is knowing that they’ve grown along with you. Especially when they’ve been listening to you since the beginning or for years, it’s just always special to see that bond of Team GFM.