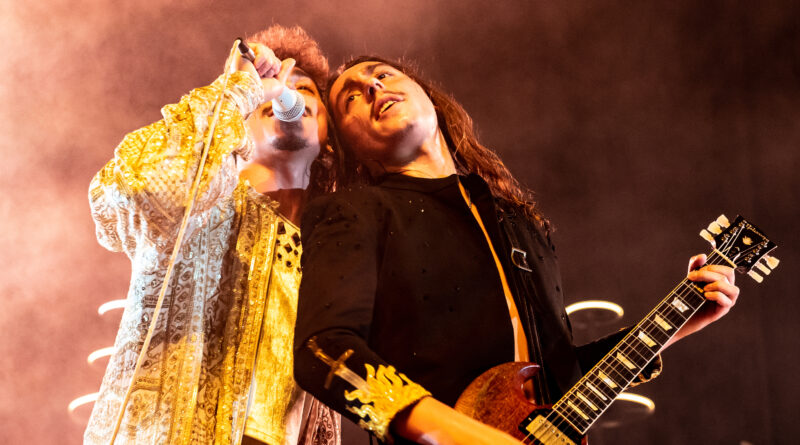 Five years ago, Greta Van Fleet was a youthful band of wide-eyed, Frankenmuth, Michigan natives criss-crossing the country in search of an identity as much as they were an audience.

Brothers Josh (vocals), Jake (guitars) and Sam Kiszka (bass, keyboards), along with childhood friend Danny Wagner (drums), hit the club circuit with just one song under their recorded belts but managed to build such an impressive cult following that they soon parlayed that it an E.P., and eventually, two full-length albums.

The audience half of their journey has gone according to plan. From 700-seaters to arenas in basically three years (two were wiped out due to the pandemic) is an impressive accomplishment. The identity portion? A work in progress. See, with Greta Van Fleet, there’s always that 800-pound mechanical gorilla called a “zeppelin” in the room. Or so say the naysayers, who say their sound, look and mannerisms are nothing but knock offs of that one group. You know, “Stairway to Heaven” and all that. Truth be told, they might have been 90 percent right in the beginning. But that was five years ago.

Wednesday night, nearly 7,000 people gathered Wells Fargo Arena in Des Moines to see if Greta Van Fleet circa 2022 and their “Dreams In Gold Tour” had shaken the shadow.

Opening with the grinding “Built by Nations,” the band set the tone early, particularly vocalist Josh with the use of his multi-octave gift that is unrivaled in the genre today, ending the song with cascades of fire shooting upward from the floor at varying points behind their clean and simply lit stage of comfortable hues of purple, red and blues.

The band gave an immediate nod to the aforementioned E.P. that got them there in the first place with the bellowing but catchy”Black Smoke Rising” and “Safari Song,” both cuts from their now-famous debut.

Slowly but surely the band has begun carving out its own niche, as was apparent in “Heat Above,”  and “Caravel,” both excellent renditions that gave nods sonically to an era long gone, but without being carbon copies.

Vocalist Josh continued his vocal gymnastics (in a good way) throughout the night, especially during “Light My Love,” and the acoustic “Broken Glass” where he stepped out from behind the hard rock rumble to accompany Jack and Josh, who was seated behind a piano where he is equally as adept, as was shown with his jazzy chops during the intro.

It was at that point that the men were separated from the boys. The trippy-sounding organ and multiple time signature changes  in  the 15-minute “Age of Machine” were enough to make any dyed-in-the-wool 1970s prog rocker proud, as was the extended version of “The Weight of Dreams,” where Jake’s guitar work shone to a point bordering on self indulgent, as the outro guitar solo stretched well past five minutes alone. The band opened the encore with “Age of Man,” wrapping up a triumvirate of songs with a total running time of more than 30 minutes. Depending on the audience, these forays can be mind-bindingly great, or incredibly tedious, depending on one’s perspective and patience. If you want sugar-coated, four minutes and out, though, this isn’t for you.

The band closed the night with the song that put Greta Van Fleet on the map —”Highway Tune” — and turned it into an extended jam as well, with Jake taking up harmonica midway through.

So has the band gotten all the “led” out? No, and it’s likely they never will. And that’s perfectly fine. In this instance, it’s simply better to leave well enough alone and just enjoy it for what it is — great rock and roll being produced by some young, incredibly talented musicians.

Sometimes, as another highly influential band once said, you just have to let it be.