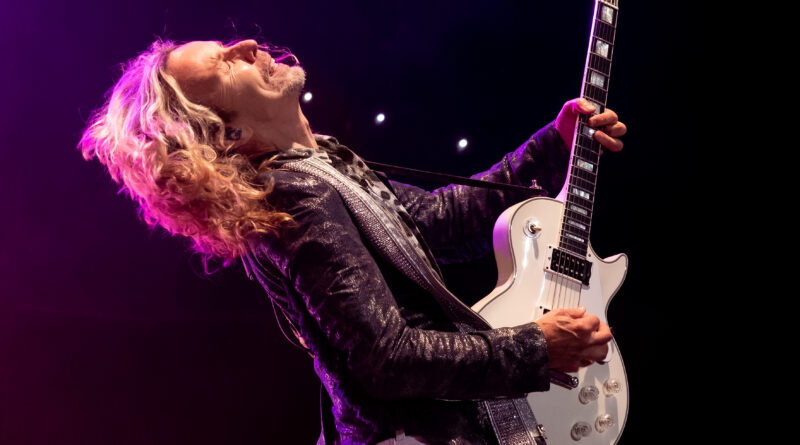 One would be hard pressed to find a tour with more collectively recognizable songs than the REO Speedwagon, Styx and Loverboy package that rolled through Wells Fargo Arena in Des Moines Sunday night. Loverboy clocks in at around 40 years of having been a band, while both REO Speedwagon and Styx are celebrating their 50th years on Planet Earth. That’s a lot of hit making. The 35-city Live and UnZoomed Tour  is a veritable rolling jukebox.

Canadian rockers Loverboy kick things off each night, while Styx and REO alternate as headliners. Loverboy is the appetizer.

Original members vocalist Mike Reno, guitarist Paul Dean, drummer Matt Frenette, and keyboardist Doug Johnson on keyboards, as well as “new guy” Ken Sinnaeve on bass, hit the ground running — or at least at a slight jog — with “Notorious,” as well as radio staples “Queen of the Broken Hearts” and the Mutt Lange-penned “Loving Every Minute Of It,”  all of which were loyal representations of the versions that first hit the airwaves some 35+ years ago. The band’s age began to show a bit on “Hot Girls In Love,” a slightly revved down version to the original, as was ” The Kid Is Hot Tonite,” a single from their debut album back in 1981.

A step slow aside, the rest of the set sounded good, especially the thumping “When It’s Over,” with its instantly recognizable bass line intro. The band closed things with  “When It’s Over,” “Turn Me Loose” and the smash, “Working For the Weekend.”

Styx, to put it bluntly, stole the show. The band may be 50 years in, but from all indications, they’ve got a good 20 and then some left in the tank.  Styx took care of business with the razor tight vocal harmonies and precise musicianship that they’re known for.

Co-lead guitarist and sometimes lead vocalist Tommy Shaw simply refuses to age. His voice on opener “Blue Collar Man” and later on “Fooling Yourself,” belied his age. He’s that good, as was founding member and guitarist James Young, who strode about the stage in his usual confident, astute manner, delivering his guitar parts with expert precision.

Vocalist and keyboardist Lawrence Gowan was the straw that stirred the drink, though. The 56-year-old ran to and fro across the stage during “Rocking In Paradise” and “Come Sail Away” with the energy of someone half his age. And his keyboard ability? “Khedive,” a  piano instrumental from the group’s 2017 album “The Mission,” was a chops-showing lesson in his classical music dexterity, as Gowan effortlessly tickled the ivories in a way very few can.

Three songs from the group’s latest album, “Crash of the Crown,” were featured, including the title track, “Light Up,” and “Sound The Alarm.”

Iowa-born bassist Ricky Phillips and drummer Todd Sucherman (who is married to an Iowan) were labeled by Gowan as having been from “our gene pool.” Well, our gene pool must be pretty damn good, then. Founding member Chuci Pannazo made an appearance on bass during “Fooling Yourself.” “Too Much Time On My Hands,” “Mr. Roboto,” and “Renegade” closed out the set.

Show closers REO Speedwagon had a tough act to follow but did a fine job nonetheless. Vocalist Kevin Cronin, who just turned 70 years of age, is much like Shaw: his instantly recognizable vocals are nearly completely intact, and his energy is palpable.

“Don’t Let Him Go,” “Take It On The Run” and “Keep Pushing” proved that the Illinois-born Cronin still has all the tools in his arsenal to not only sing, but play guitar and put on a show.

Keyboardist Neal Doughty, who was introduced by Cronin as the only person in the band who has played on every album and every show, kicked off the smash hit  “I Can’t Fight This Feeling,” which was followed by the highlight of the night, “Like You Do.” Released in  1972, the song is replete with signature changes, hints of prog rock and a tour de force showing from Doughty and bassist Bruce William Hall, who also took his turn as lead vocalist on “Back On The Road Again.”

REO Speedwagon  is a prime example of a group that is one thing on the radio and another live. Their “corporate rock” label has its legitimacies (“Keep On Loving You), but they are the exceptions and not the rule, especially after witnessing the band live. On tracks such as “Time For Me To Fly,” “Riding the Storm Out,” and set closer “Roll With The Changes,” REO makes no bones about what they are: a self-proclaimed, straight ahead, meat and potatoes rock n’ roll band.

The more than 10,000 in attendance Sunday night agreed. Nearly four hours of rock n’ roll is a meal not to be missed.