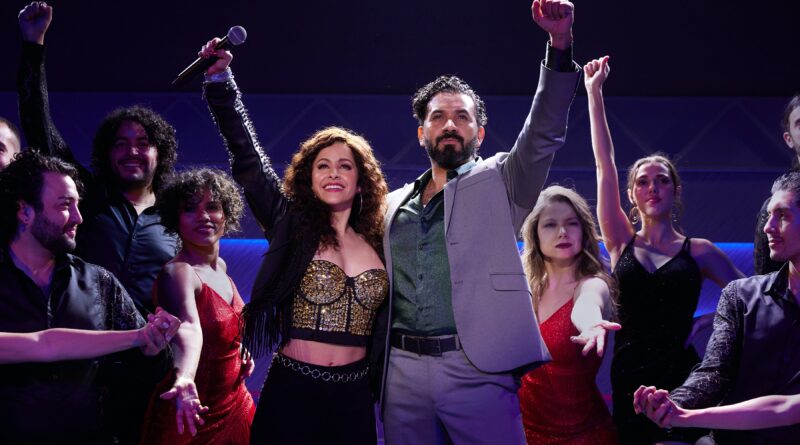 Stephens Auditorium will present a new production of the smash hit musical “On Your Feet! The Story of Emilio & Gloria Estefan,” on Sunday, January 15 at 7:30 pm.

ON YOUR FEET!, the exhilarating original musical based on the extraordinary life of 26-time Grammy Award-winning husband-and-wife team Gloria and Emilio Estefan, features a book by Academy Award and Golden Globe winner Alexander Dinelaris and a score made up of some of the most loved and iconic songs of the past quarter-century including “Rhythm is Gonna Get You,” “Conga,” “Get On Your Feet,” “Don’t Want To Lose You Now,” “1-2-3” and “Coming Out of the Dark.” Having begun in Chicago in the summer of 2015, ON YOUR FEET! made its Broadway bow that November, played for two years, and received seven Outer Critics Circle Award nominations, three Drama League Award nominations and a Tony Award® nomination for Best Choreography.

Gaby Albo and Samuel Garnica will star as Gloria and Emilio Estefan in this national touring production of the smash hit Broadway musical, ON YOUR FEET! THE STORY OF EMILIO & GLORIA ESTEFAN. This exciting new production is directed and choreographed by Luis Salgado, who performed in the original Broadway production of ON YOUR FEET! and was the Assistant Latin Choreographer of In the Heights on Broadway, which won four Tony Awards®.

Albo and Garnica starred in the critically acclaimed world premiere of ON YOUR FEET! in Spanish at the GALA Hispanic Theatre in Washington, D.C., directed and choreographed by Salgado, where both earned rave reviews from audiences and critics alike.

Mexican actor Gaby Albo made her stage debut in A Chorus Line in Mexico, followed by other iconic shows such as Aladdin, Cats, Mentiras and the North American tour of West Side Story. She is a graduate of AMDA NY where she was featured in their Broadway’s Rising Stars showcase. In 2017, she was a semifinalist on The Voice TV competition in Mexico.

Venezuelan actor Samuel Garnica’s credits include El Laurel de Apolo and La Canción (Repertorio Español, New York), The Tempest (R.Evolucion Latina), Matilda (Salgado Productions), Love and Yogurt (New York Theater Barn) The Dropout, and more. He has been the voice for Boost Mobile, Papa John’s, Publix, Pepsi, and Nivea Men among others. His awards include the 2017 ATI award for best supporting actor for his work on Así Que Pasen 5 Años, and the 2019 award for best actor at the Fuerza Fest for his work on La Llamada de Lauren.

“Being able to celebrate our culture, roots and ancestors through the Estefans’ story allows me to write my own story in my journey as an artist, which I hope can also inspire others to ‘seguir la tradición,’” said Garnica.

“We are deeply honored to have Gaby Albo and Samuel Garnica leading the cast of this newest version of ON YOUR FEET!,” said Gloria and Emilio Estefan. “Having seen both of these talented young performers in the show, we are confident that they will dazzle and delight audiences across the country. Gaby throws herself into the music and dancing with such fervor, and Samuel couldn’t be more charming. They represent the heart and soul of our story, and audiences will surely feel their authenticity. We can’t wait to see them on stage again!”

Tickets to ON YOUR FEET! are on sale now and are available at the Stephens Ticket Office or online at www.center.iastate.edu.