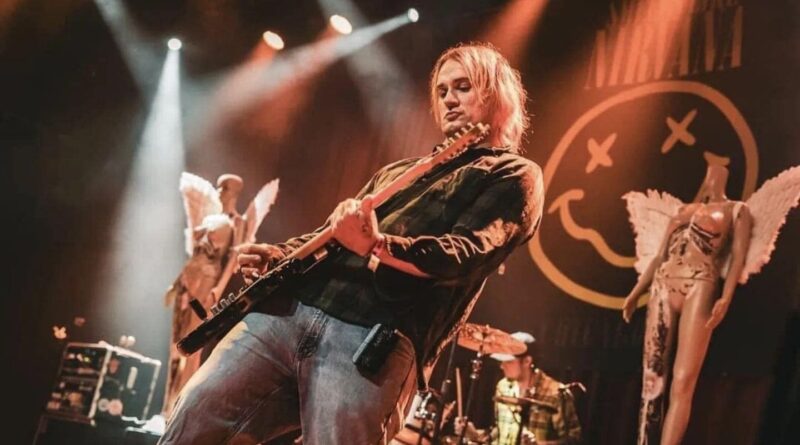 It’s all there: the hair, the gravelly voice, the tone. Always has been. So much so that when Wandtke saw the amount of work it was going to take to gain some traction in an already-saturated industry with his own band, Dead Original, he decided he needed some help. And Smells Like Teen Spirit was born.

Suddenly, things began to look up. So good in fact, that now, Wandtke, along with Dead Original bandmates bassist Mike Petrasek and drummer Joe Kus, serve as the opening act for Smells Like Teen Spirit.

Suffice to say, it’s been … nirvana. “When I decided to put together a Nirvana tribute band, I knew I’d learn a lot, and I did,” Wandtke said. “It’s been really cool and inspiring. Seeing people in the audience sing along to all of the songs was a definite plus, too. It’s a lot harder when you’re playing your own.”

Another plus is the time it takes for Wandtke to “become” Cobain every night. Whereas it takes KISS legends Gene Simmons and Paul Stanley hours to get ready for the show with their makeup and costumes, Wandtke’s requirements are much, much simpler.

“All you have to have is a flannel shirt and blonde hair,” he jokes.

And talent, of which Wandtke is the possessor of, to the point he can play the guitar with both hands. Kind of.

Unlike Cobain, who was a left-handed player, Wandtke plays guitar right-handed, a fact he said isn’t lost on the hardest of the hardcore Nirvana fans in the audience at times. But he’s working on a solution.

“It’s only about 10 percent who notice and say something, but I’ve been practicing left-handed, and it’s been going well,” he said. “I can do the simpler songs like ‘Polly’ and ‘Dumb,’ so I’m going to start bringing a left-handed guitar and sneaking it into the set and say, ‘This is for all the haters. Here we go.’ ”

Wandtke’s musical roots go deep. At just seven years of age he formed a punk rock band along with his brother and his cousin, jamming to the likes of Pennywise, No Doubt, NOFX and, of course, Nirvana, a band he hadn’t heard of until one day when he was unceremoniously handed a couple of homemade cassettes.

Those tapes would change his life.

“I got two demo tapes gifted to me when I was kid — one was Motley Crue’s ‘Girls, Girls, Girls’ and the other was ‘Smells Like Teen Spirit,’ ” Wandtke said. “I listened to both and just fell in love with Nirvana. I later got into the 80s hard rock, too, but there was something about Nirvana’s music that was just pure and honest.”

Wandtke has been a drummer his entire life, and eventually built a solid career as a musician that included stints as the touring drummer for the hit musical “Rock of Ages,” an even a stint with the Grammy-nominated heavy metal band Trivium from 2015-17 during the band’s “Silence In The Snow” album cycle. Wandtke said it was almost as though he was living out a real-life version of the movie “Rock Star,” starring Mark Wahlberg and Jennifer Anniston, in which Wahlberg attends a concert by his favorite band only to find himself an actual member of it soon thereafter.

“I kind of felt like that. I was playing these festivals with Trivium, the biggest one being in front of 100,000 people in Belgium,” he said. “Nicko (McBrain, Iron Maiden drummer) was watching the set, and everything was cool. But financially, I wasn’t being compensated that well for the level of that band that it was, so I decided that if I was going to make close to nothing, why not just take a chance on my own stuff?”

The band will be making a series of appearances in Iowa, beginning Friday, Jan. 6 at the Raccoon Motel in Davenport, followed by a performance on Saturday, Jan.  7 at Wooly’s in Des Moines, and once more on Thursday, Feb. 9 at Elray’s Live & Dive in Iowa City.

Fans can get involved by going to the Smells Like Teen Spirit website and requesting songs they’d like to hear the band incorporate into the setlist. Wandtke won’t guarantee anything, but with an already-huge Nirvana song catalog in their flannels ready to play, there’s good chance it will.

“We know three hours of Nirvana songs,” he says, “so people are in for a treat.”